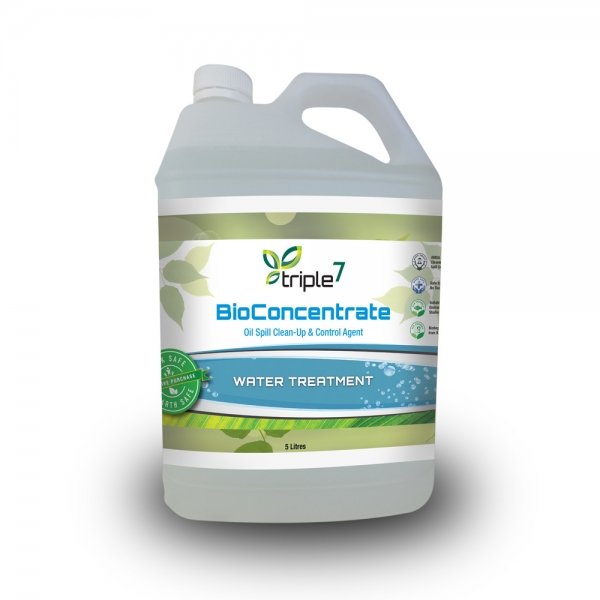 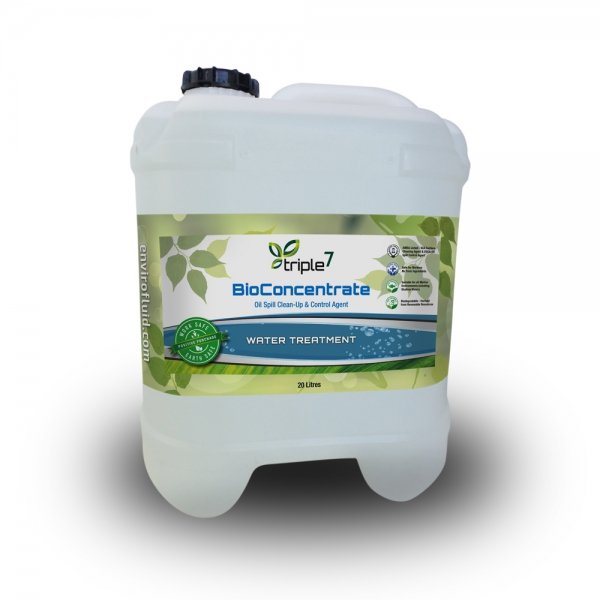 Triple7 BioConcentrate is a powerful, safe and effective oil spill clean up product and marine degreaser designed and listed for Australian marine environments.

In open-ocean and uncontained bodies of water Triple7 BioConcentrate can be applied as a spray from surface vessels or aircraft in a similar way to a dispersant. When applied to the centre of the spill the product causes oil to rapidly herd outwards into thin bands, which are then further broken up by wind and wave action.

When a spill is contained by structures and/or booms Triple7 BioConcentrate can be applied directly to the oil slick within. Once applied the agent forces the oil to rapidly migrate in an outwards direction where it collects against the booms. In this application the product actually concentrates the oil spill into a smaller surface area where it can be more effectively collected and/or burnt. If burning is used to dispose of the oil Triple7 BioConcentrate will not affect the burn efficiency.

The oil can be captured with the use of lipophilic booms (high or low density polyethylene), oil/ water phase separation systems (fabric, flood, filtration or centrifugal) or other oil collection systems.

A Surface Cleaning Agent (SCA) is a product which, when applied to oil on shorelines or other firm surfaces facilitates the removal of the oil by natural processes or cleanup activities.

In this type of application Triple7 BioConcentrate functions like a ‘quick break’ degreaser by rapidly lifting oil soiling from surfaces without forming a permanent emulsion. The product may be applied as a broad spectrum spray, metered into the oil body or boom applied by saturating hydrophobic booms with the Triple7 BioConcentrate solution.

Bio Concentrate has a shelf life of 10 years. The recommended volume of Triple7 BioConcentrate that should be kept on standby is at least 1% of the volume of the largest potential oil spill.

Triple7 BioConcentrate is an ideal cleaner and marine degreaser for oil spills and oil based soiling on all types on natural and man-made surfaces including: decks, ship’s side, piers, wharfs, and response vehicles. It is non corrosive and does not react with the cleaning surface. The product can also be used for tank cleaning and as an effective oil vapour dispersant.

Because Triple7 BioConcentrate is safe for release into marine environments it is the marine degreaser of choice where waste water run-off is difficult to manage.

Unlike caustic cleaners, Triple7 BioConcentrate releases soiling without reacting with the cleaning surface, making it safe for metals, plastics, rubbers and fabrics.

There are no known application restrictions in a water environment and no known legal restrictions limiting the use of Triple7 BioConcentrate.

Because Triple7 BioConcentrate is listed on the AMSA National Oil Spill Control Agent (OSCA) Register, its use is widely accepted as a gold standard in ocean oil spill cleanup and oily waste water treatment. It is currently used for isolating MTBE from ground water; for separating oil and water emulsions where they occur and water borne cleaning applications aboard ocean vessels and in coastal clean-up applications world-wide.

Safe for your Workers

Triple7 BioConcentrate does not contain chemicals determined by the EPA (Environmental Protection Authority) or WHS (Work Health & Safety) to be carcinogenic or a suspected carcinogen, reducing the risk of future litigation claims.

You can replace hazardous products without changing equipment or procedures and BioConcentrate is safe for use in confined areas.

Safe for the Environment

Triple7 BioConcentrate contains no ozone depleting chemicals or hazardous air pollutants and the product is readily biodegradable. Furthermore, Triple7 BioConcentrate does not bio accumulate or upset the balance of ecosystems, which makes it safe for marine animals and plant life. There are no known legal or application restrictions for use of this product in a water environment.

Triple7 BioConcentrate is a non-ionic surfactant solution that reduces oil mats to their mono-layer molecule or particle by separating the oil droplets in an oil spill from one another without actually combining with the oil body or forming a standing emulsion. Very short lived micro-emulsions are formed and as the hydroxyl or water phase attachment occurs, the extremely weak oil phase serves only to create a water interface (particle separation) in water borne systems.

Unlike traditional oil dispersants this means that the product does not disperse oil throughout the water column and, instead, causes it to break up on the surface.

Molecules of oil, fats, greases, lipids and proteins are separated from each other and forced to the edge of an oil slick, the same of which becomes wider if not contained with booms and oil collection systems.

Because Triple7 BioConcentrate is non-corrosive, it is safe for metals, rubber and virtually all other surfaces.

Triple7 BioConcentrate has a unique cleaning action which lifts, separates and holds the soiling in suspension.  The hyperactivity of minute particles (micelles), breaks the surface tension of water and in effect cause dirt and oils to separate from the water.

Triple7 BioConcentrate has no Hazchem rating so it needs no special storage areas, lowering the cost of transport, handling and storage.  It is also non-reactive with other chemicals, which minimizes the possibility of hazardous conditions.

Triple7 BioConcentrate is highly concentrated, requiring less product to be transported and deployed. Because the product is also an effective general cleaning agent and marine degreaser this one product can meet almost all oil related marine degreasing requirements.

(this product was previously known as Triple7 Colloidal Concentrate)

There are no reviews yet.

Be the first to review “Triple7 BioConcentrate” Cancel reply 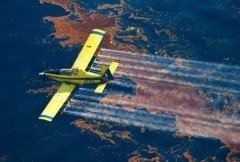 A recent study has revealed that oil spill dispersants make the an oil spill 52 times more toxic than original spill. Find out about the … 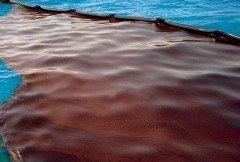