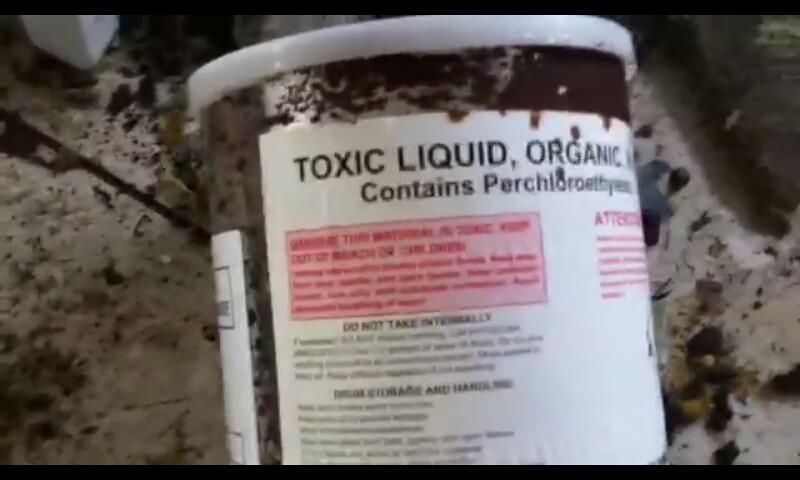 Tetrachloroethylene may be a chemical you’ve never heard of, but chances are pretty good that it’s a substance you’ve been in contact with, particularly if you use brake cleaner. Tetrachloroethylene (also called perchloroethylene or PERC) is an industrial solvent used for degreasing metals and dry cleaning fabrics. It is an ingredient sometimes found in printing inks, adhesives, sealants, wood cleaner, shoe polish, leather treatments, type writer correction fluid (back in the day), lubricants and silicone. Because Tetrachloroethylene is non-flammable and fast drying (through evaporation), it is an ingredient in aerosol solvents, most notably, brake cleaner.

Although this chemical is a great solvent, it is far from great for people. Tetrachloroethylene carries a range of serious health and safety risks through both short-term and long-term exposure to the chemical. People are most at risk of illness and injury when they regularly handle or are directly exposed to Tetrachloroethylene in its liquid and gas state. An example would be a workshop mechanic who uses brake cleaner aerosols routinely. In addition to the significant risks Tetrachloroethylene carries, the substance becomes an extremely poisonous gas called Phosgene when it is heated to temperatures above 315 degrees Celsius. This means that a workplace that uses brake cleaner AND ALSO uses extreme heat on the premises (such as welding) is a seriously dangerous place to be.

Health and Safety Risks of Tetrachloroethylene 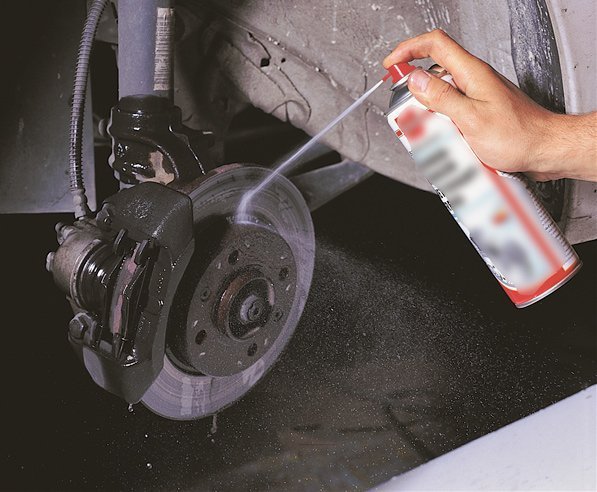 Exposure to this chemical is through skin contact and breathing in evaporated fumes. Both of these exposure routes are almost inevitable when using it as a brake cleaner spray. Because Tetrachloroethylene has a high vapour pressure, it readily evaporates at room temperature, creating a hazard wherever it is used. Tetrachloroethylene has a range of established health and safety risks.

Short-term exposure: Low levels of Tetrachloroethylene vapour can irritate eyes, nose, mouth, throat and respiratory tract, and cause dizziness, headache, sleepiness and confusion. Direct contact with skin causes irritation and discomfort. Short term exposure to higher levels of Tetrachloroethylene can cause build-up of fluid in the lungs, respiratory irritation, severe shortness of breath, sweating, nausea and vomiting. In extreme cases, short-term exposure to higher levels of this chemical can cause unconsciousness and death.

Long-term exposure: Tetrachloroethylene has been classified by the International Agency for Research on Cancer as a Group 2A Carcinogen, which means that it probably causes cancer in humans. The chemical has been linked to oesophagal cancer, cervical cancer, and non-Hodgkin lymphoma. Animal studies have linked Tetrachloroethylene to liver tumours in mice and kidney tumours in rats.

Long-term exposure to Tetrachloroethylene can damage the central nervous system, liver and kidneys. It can lead to respiratory issues, memory loss and confusion, and acquired colour vision deficiencies. There is a growing body of evidence linking Tetrachloroethylene to a substantial increase in the risk of developing Parkinson’s disease.

Tetrachloroethylene is classified as a teratogen which means that ongoing exposure while pregnant can damage the developing fetus.

Tetrachloroethylene is commonly found in brake cleaners used in workshops. Despite its toxicity, it is an extremely effective, quick drying and non-flammable solvent. Unfortunately, this chemical’s prevalence may lead to it being used for non-brake cleaning purposes, such as metal surface cleaning prior to welding. Heating Tetrachloroethylene brake cleaner residue past 315 degrees Celsius, such as in the presence of welding, creates Phosgene.

Phosgene is a Deadly Gas 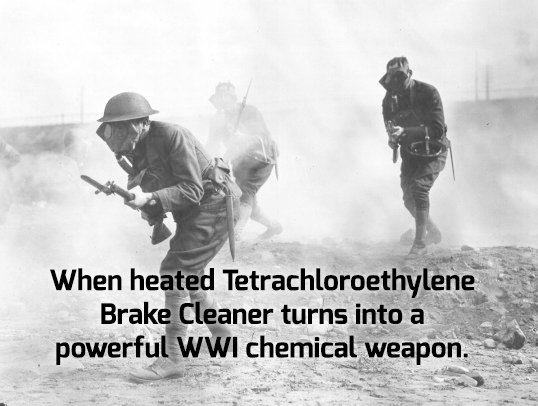 Phosgene gas is a pulmonary (choking) agent which was used as a chemical weapon during World War 1. It is a white or pale yellow gas that creates a vapour cloud near the ground and spreads quickly. It can be fatal in doses as low as 4 parts per million. Once exposed, there is no antidote for Phosgene poisoning.

During, or immediately after exposure to a dangerous concentration of Phosgene, people can experience an unpleasant range of symptoms including: coughing, difficulty breathing, burning sensation in eyes, nose and throat, nausea and vomiting, skin lesions, low blood pressure and heart failure. It is not uncommon for the effects of Phosgene poisoning to be delayed by 2-6 hours or even longer, before signs of pulmonary oedema, kidney, liver or heart failure are observed. Full recovery is possible depending on the concentration of gas the person was exposed to. However ongoing chronic bronchitis and emphysema can be experienced after Phosgene exposure.

There are a number of notable cases of Phosgene poisoning as a result of incorrect use of Tetrachloroethylene brake cleaner.

The best way to avoid these alarming risks is to use safer solvent alternatives in the workplace. Developments in solvent technology mean that Tetrachloroethylene is an avoidable hazard for workshops and maintenance operations. Better performing and safer brake cleaner and other workshop solvents are readily available. Superior and safer solvents free of Tetrachloroethylene remove the risks associated with exposure to this toxin. They also eliminate the possibility of accidently creating deadly Phosgene gas in the workplace.

Related Article: Many “Tetrachloroethylene Free” brake cleaners replace the solvent with n-Hexane instead. n-Hexane is a powerful nerve toxin which is readily absorbed into the body. Read more. 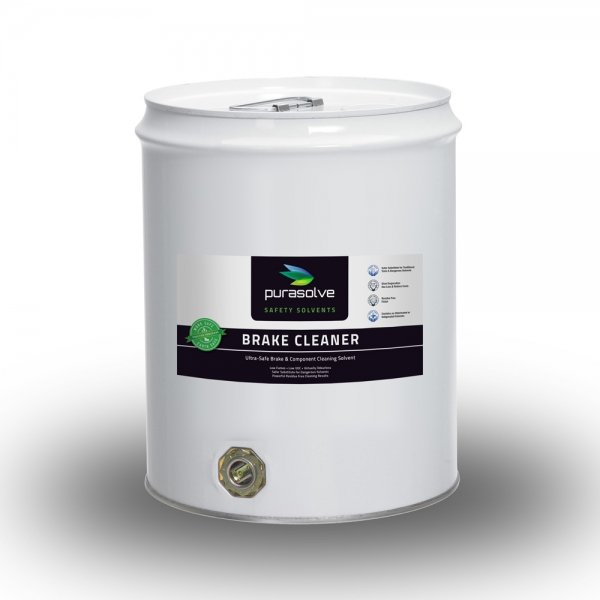 6 responses to “Tetrachloroethylene, a deadly danger in brake cleaner”